The text exchange was along the following lines: me: 'There's broken cloud cumulus/stratocumulus at 2500' with tops to 4500'. Can we reschedule? Chief Pilot and Instructor Kayle: 'Good day for a lesson, no showers so a very stable situation'.

My preferred altitude was 8500' to keep clear of the many mountain ranges in south-west Tasmania, so clearly this wasn't going to be an option today. The adage that '...you don't know what you don't know' applies in this situation of not knowing how to make it work, but having complete confidence in my instructor, it was an easy decision to make to put on my flying cap.

The first segment of the flight was straight-forward and we tracked to Huonville at our revised ATC clearance of 4500'. Cloud loomed ahead of us at about the same altitude we were flying, at which point Kayle asked me what our options were. My response: 'Well, we could follow the Huon River west'. A second option to turn-around and retrace our track was also available but it wasn't needed at this stage; the cloud prevented a direct flight, but there was sufficient clearance between cloud and terrain for valley flying. A quick reminder of the tight turning capability of a Cessna at 2000rpm and 10 degrees flap reassured me that the exit option was readily available.

The day unfolded as a perfect opportunity for instruction from Kayle in valley flying and track crawling. The work pattern was clear: identify a feature, estimate the time interval to the feature (ETI), note the actual time at feature, and repeat. The track breadcrumbs gradually start appearing on the map and a coherent plan unfolded. Distractions from low flying would interrupt the routine, but following the method as much as practicable was critical. Tributaries of the Huon River provide useful features, while the mountain features on my original plan, covered in cloud, were unhelpful. Eventually, we emerged at the Arthur Plains and followed a track between the Western Arthur Range and Eastern Arthur Range to Bathurst Harbour. With hindsight, a combination of mountain and valley features would be recommended.

The approach to Melaleuca at Bathurst Harbour is spectacular. Two Par Avion planes were  departing back to Cambridge and will follow the same route, so a listening watch on CTAF is very important. We make our radio calls and set up for left downwind approach to RWY 30. The airstrip dates back to 1957 and was constructed by the legend of Melaleuca, Deny King. The tractor Deny used had to be brought in on a fishing boat. Constructing the airstrip was described as a colossal task, and entirely done by Deny himself ('King of the Wilderness', Christobel Mattingley 2001).

Kayle asked me to take us home via Florentine Peak, so we tracked around the Western Arthur Range to Lake Pedder, Lake Gordon, Florentine Peak (somewhere under the cloud), Maydena, Tyenna, and then along the Derwent River home to Cambridge. We flew over the airstrip at Maydena and noted that tyres on the airstrip had made it unserviceable other than for emergency use. A simulated engine failure and a flapless landing back at Cambridge rounded off the training for the day.

A flight to Melaleuca at Bathurst Harbour with Par Avion, whether as a passenger or student pilot, is highly recommended. The track followed on the day is shown approximately in the attached link. Also note that there is a Fly Neighbourly advice for the Western Tasmania World Heritage Area and Mt Field to reduce aircraft noise in the area. 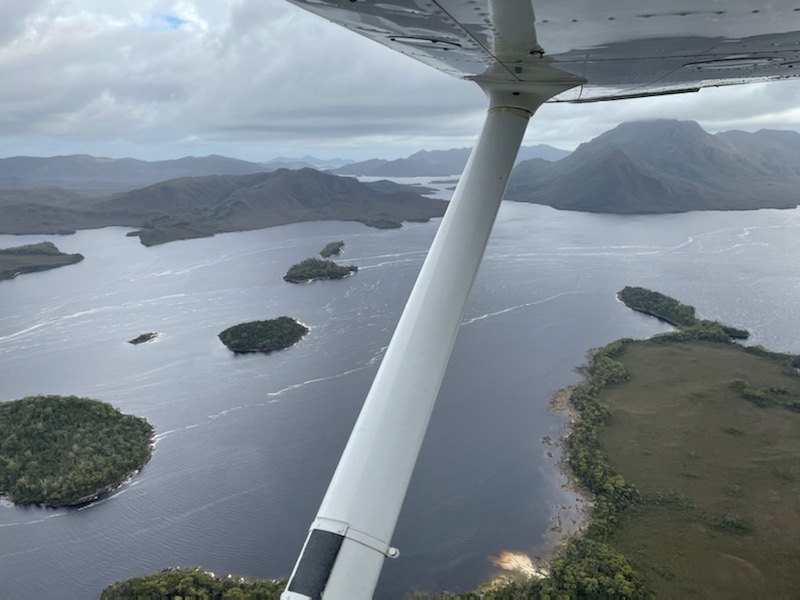