As the saying go 'variety is the spice of life', and this is especially the case with learning to fly. The gradual introduction of new and novel experiences is an important part of the learning process for low hours pilots such as myself (still fewer than 200 hours). Encountering these experiences and dealing with them without the support of an instructor is important for gaining confidence in decision-making.

Some experiences can be new but are still anticipated. This was the case with my recent solo navigation flight from Cambridge to Launceston in the north of Tasmania. The usual main runway 12/30 at Cambridge was not available due to a crane at the eastern end being used on a major highway upgrade. This was all communicated to pilots, allowing procedures to be rehearsed. That worked quite well except my landing on return was flatter than I would like, probably due to the upward slope on runway 14 and needing more experience with this runway. Similarly, the weather was as expected. It was a day when the cloud predictions from windyty.com a few days earlier ended up being remarkably close to the BOM Graphical Area Forecast, and both coincided remarkably well with the weather on the day. The high point on the Midlands Highway is at St Peter's Pass near Oatlands, where snow can be experienced in the cooler months. It is a location where highland weather can be encountered and, for the pilot, an area with a greater likelihood of low cloud on a track to Launceston.

Other flying experiences might come as a bit of a surprise, although with the benefit of hindsight might also be predictable and able to be anticipated. A departure by ATC to track via Sorell and then direct to Launceston put me 5 miles off my planned track, but given a departure from runway 14 and the likelihood of inbound jet traffic landing on runway 12 at Hobart, this track shouldn't have been a surprise. Tasmania is a mountaneous island and being off my planned track in a low cloud situation added a little stress. Once outside of Class D airspace, I chose to return to my original track, which I joined at Lake Tiberias (see map). In any event, the cloud started to close in beyond Oatlands, as anticipated, and I chose to return to Cambridge. I was given a clearance to track direct to Cambridge and a straight in approach on runway 14. Straight in approaches on a runway not experienced before can also add novelty.

It was good to have those experiences and I'm looking forward to the next flight.

Update: A few weeks later in November 2021, I completed this flight. It was a small window of cloudy but stable weather in what has been generally a period of La Nina instability in eastern Australia, including Tasmania. I had broken cloud at 3500', which is absolutely fine for this flight through the Midlands of Tasmania. Once outside of controlled airspace only small changes in altitude were needed to keep clear of cloud. There are some nice waypoints on this flight: I chose the town of Oatlands and the nearby Lake Dulverton. I also used a waypoint of one of Tasmania's many 'sugarloaf' mountains, Jacob's Sugarloaf. By the way, as evidence of what a hilly island Tasmania is, we have some 150 hills or mountains that have the title of 'Sugarloaf'. Perhaps it is also evidence of the early colonial obsession with sugar - an obsession with naming hills after dead white men in landscapes that resembled conical piles of sugar. It gets even stranger though, few of these hills are conical - the sugar loaves have to lie flat for there to be any resemblance at all. Fast forward, imagine sitting in your local coffee shop and seeing a cube of white sugar and deciding to call the nearby hill: Stephens white highly-refined sugar cube. Bloody hell, best argument I've heard for Aboriginal place-names.

Before departing Cambridge my instructor asked me to track the VOR into Launceston and name the radial I was flying on, so I jotted down the radial and began the usual pre-landing preparations. In the last few weeks of calm before jet traffic is due to increase dramatically to Tasmania, there was no delay in getting a clearance for a touch and go at Launceston Airport.

It is definitely an exciting experience to land at a big airport. I brought to mind the fore-warnings about the changed perspective that can cause pilots, accustomed to narrow runways, to flare (slow the plane down) too early. This will cause the aircraft, now lacking sufficient energy, to drop to the runway. Completing the touch and go at Launceston, I made a left turn and tracked for my return to Cambridge.

From Craigbourne Reservoir, I was given clearance to track via Campania and Richmond for a straight-in approach to runway 12. The Mount Pleasant Radio Observatory near Cambridge provides a useful feature to track to before turning on to final for runway 12.

Runway 12 has a similar upward slope to runway 14 at Cambridge. So I concentrated on correcting my earlier error on runway 14 of landing too flat. It seems what is necessary is for the approach to match the upward slope of the runway. Thinking this through, the landing was better than previously with a longer flare. On the other hand, the variable wind caused some late deviation off the centreline, so still not totally happy but landings are always a work in progress I believe. 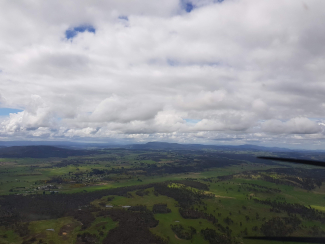 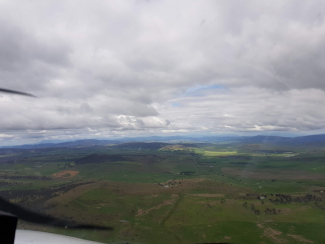